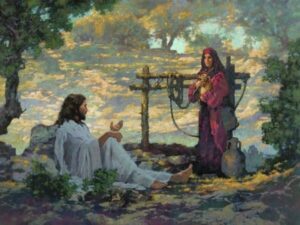 painting by Michael Dudash
Jesus speaking with the woman of Samaria

In these days of stress, lockdown and isolation it is likely that you might lose your appetite.  Our privileged lives have not experienced the hardship and deprivation of previous times.  It is not likely that the idea of hungering or thirsting resonates very well with us?  Unless you have been on a severe diet I suppose?

In the wilderness journey, Israel suffered thirst and hunger.  It was a test.  They began to think they were better off as slaves in Egypt than free to serve the LORD.  The complained of hunger and thirst.  God provided food and water for them.

The Lord Jesus equated spiritual things with food and drink.  He offered a blessing for those who hungered and thirsted after righteousness.  He told the woman at the well about the water she really needed – spiritual water to satisy her inner thirst.  On the last day of the Great Feast of Tabernacles Jesus shouted out,

“Let anyone who is thirsty come to me and drink.  Whoever believes in me, as Scripture has said, rivers of living water will flow from within them.”  By this he meant the Spirit, whom those who believed in him were later to receive. Up to that time the Spirit had not been given, since Jesus had not yet been glorified. John 7:37-39

Jesus compared His death on the Cross with Bread and Wine.  Remembering Him is like having our hunger and thirst satisfied.

As we try to maintain an active spiritual life we may struggle and feel a loss of appetite.  Meetings might become a chore, Bible reading and prayer might become mere routines.  Let us hold fast to what is good and not give up.  Let us seek God’s grace and be careful not to drift away.  We have many great examples of living faith.  People who held on and kept on against many difficulties.  Probably among Christians you knew.  Christians you know. Heroes of faith, like the apostle Paul:

2Co 4:7-9  … we have this treasure in jars of clay to show that this all-surpassing power is from God and not from us.  (8)  We are hard pressed on every side, but not crushed; perplexed, but not in despair;  (9)  persecuted, but not abandoned; struck down, but not destroyed.

Paul did not try to duck out of the consequences of living for God in an unbelieving world.  The tests of life helped him to show that his faith in Jesus was real.

Blessed are you, Sovereign God,
ruler and judge of all,
to you be praise and glory for ever.
In the darkness of this age that is passing away
may the light of your presence which the saints enjoy
surround our steps as we journey on.
May we reflect your glory this day
and so be made ready to see your face
in the heavenly city where night shall be no more.
Blessed be God, Father, Son and Holy Spirit.

Blessed be God for ever.