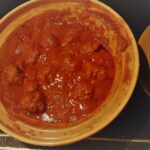 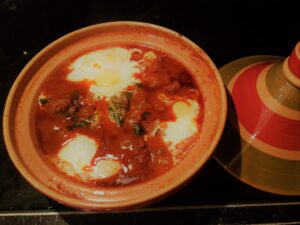 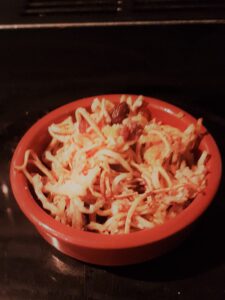 The main course is a one pot classic Jewish meal called Shakshuka.  This version is with lamb meatballs, spinach and poached eggs.  Shakshuka was introduced into Israel a few hundred years ago by Tunisian Jews and became a popular meal.  It’s typical of north African cooking and broadly similar to other dishes from Morocco etc, although the spices are different.  One of the photos shows the meatballs in the sauce before the eggs and spinach were added.
The dessert is Lokshen, a very Jewish meal consisting of noodles, sultanas and spices.
from Jeff
Get in touch for the recipe!