He took him outside and said, “Look up at the heavens and count the stars–if indeed you can count them.” Then he said to him, “So shall your offspring be.” Abram believed the LORD, and he credited it to him as righteousness. Genesis 15:5-6

Abraham asked God for reassurance about the great Promise.So the Lord arranged with Abraham to make a special sacrifice which involved dividing each animal case in two.  For a whole day Abraham walked between these carcasses keeping the flies and predators away.  Then, in the evening he fell into a deep sleep.  In that sleep God revealed what would happen to his offspring in centuries to come.  God spoke about Israel in Egypt and their possessing the Promised Land. 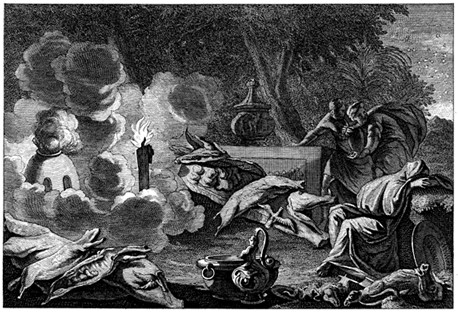 On that day the LORD made a covenant with Abram and said, “To your descendants I give this land, from the river of Egypt to the great river, the Euphrates– Genesis 15:18

Abraham woke in the dark and saw smoke and fire move between the carcases.  God was confirming His promise and sealing this Covenant.

In Chapter 17, God re-affirms His Promise and introduces a mark of the Covenant for Abraham’s offspring.  All males were to be circumcised. This was an act of faith and trust in God.  An affirmation of hope that the inheritance would surely be received.

By faith Abraham, when called to go to a place he would later receive as his inheritance, obeyed and went, even though he did not know where he was going. By faith he made his home in the promised land like a stranger in a foreign country; he lived in tents, as did Isaac and Jacob, who were heirs with him of the same promise. For he was looking forward to the city with foundations, whose architect and builder is God. Hebrews 11:8-10

We know that Abraham was made righteous before he received the covenant mark of circumcision.  The promise had already been made.

There is a parallel for Christians:

And you also were included in Christ when you heard the word of truth, the gospel of your salvation. Having believed, you were marked in him with a seal, the promised Holy Spirit, who is a deposit guaranteeing our inheritance until the redemption of those who are God’s possession–to the praise of his glory. Ephesians 1:13-14