ABRAHAM THE FRIEND OF GOD

Note – there were three Persons speaking with Abraham. 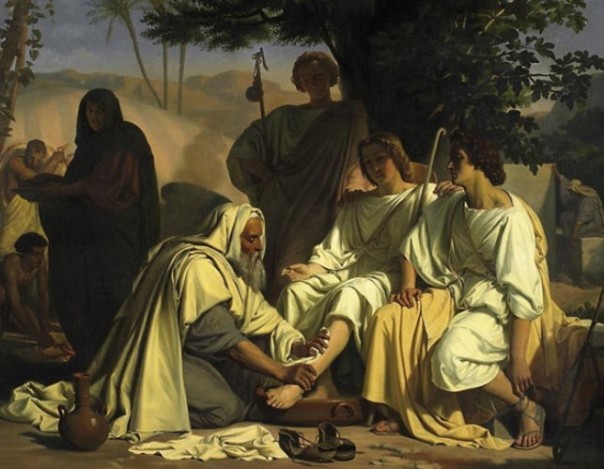 Abraham looked up and saw three men standing nearby. When he saw them, he hurried from the entrance of his tent to meet them and bowed low to the ground. Genesis 18:2

Two of these men went down to view Sodom and Gomorrah.  One stayed.

God spoke with Abraham as with a friend:

And the scripture was fulfilled that says, “Abraham believed God, and it was credited to him as righteousness,” and he was called God’s friend. James 2:23

“But you, O Israel, my servant, Jacob, whom I have chosen, you descendants of Abraham my friend, Isaiah 41:8

The LORD would speak to Moses face to face, as a man speaks with his friend. Then Moses would return to the camp, but his young aide Joshua son of Nun did not leave the tent. Exodus 33:11

Our Lord Jesus said,  My command is this: Love each other as I have loved you. Greater love has no one than this, that he lay down his life for his friends. You are my friends if you do what I command. I no longer call you servants, because a servant does not know his master’s business. Instead, I have called you friends, for everything that I learned from my Father I have made known to you. John 15:12-15

The key thought in friendship with God is that God will share His Ways and Will with loyal friends.

Then the LORD said, “Shall I hide from Abraham what I am about to do? Genesis 18:17

The context is challenging.  God revealed to Abraham what He planned to do to the cities of the Plain [Sodom and Gomorrah].  Abraham does not question God’s Sovereign right to judge but he does speak, as friend to friend, about justice [See Genesis Chapter 18].  The discussion is about how gracious God will be.  After all, there might be 50 righteous people in the cities.  By “righteous” I think Abraham referred to people who were trying to do the right thing and have faith in the One God.  Note that Abraham is careful about intruding on his Friend’s territory.  Friends recognise the importance of each other and do not try to manipulate them.  God answers Abraham without being “touchy”.  God does not treat his friend as an “inferior”.

The outcome of the discussion is that Abraham gets down to asking for 10 righteous people.  There he stops.  I have heard teaching that Abraham could have dropped the number further.  No, he knew when to stop.  He had heard from God that there were not 10 righteous people!  In fact, we discover that there were 4.  These were rescued in a miraculous way.  God rescued them in answer to Abraham’s intercession.  Those 4 have a history.  One looked back in disobedience.  The other three …. Well!!!!!  BUT God did not leave them in the judgement of the cities – even though He knew what they would do after being rescued.

There are some lessons here:

Do nothing out of selfish ambition or vain conceit, but in humility consider others better than yourselves.  Philippians 2:3

Now we ask you, brothers, to respect those who work hard among you, who are over you in the Lord and who admonish you. Hold them in the highest regard in love because of their work. Live in peace with each other. 1 Thessalonians 5:12-13