Through Abraham’s faithful walk with God he faced many challenges related to God’s Promises.  Where was the son promised him?  Sarah struggled with this too.  A point came where they conspire together to get God’s work done for Him.

Now Sarai, Abram’s wife, had borne him no children. But she had an Egyptian maidservant named Hagar; so she said to Abram, “The LORD has kept me from having children. Go, sleep with my maidservant; perhaps I can build a family through her.” Abram agreed to what Sarai said. Genesis 16:1-2

Now, this happened before the destruction of Sodom. And just after God made a covenant with Abraham that sealed his future.  And before circumcision was instituted. 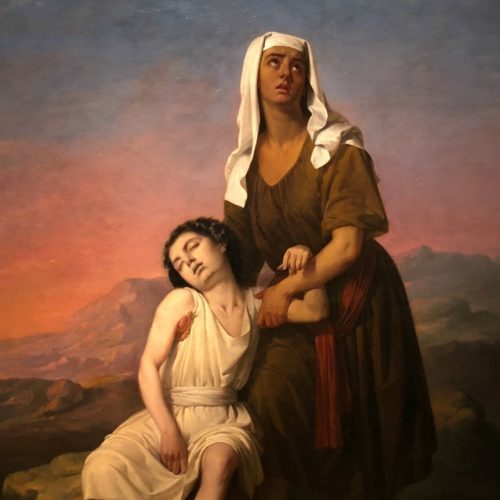 Antonio María Esquivel, “Hagar and Ishmael in the Desert”

Usually, this story is spoken about in terms of human weakness, lack of faith, jealousy and cruelty.  Instead I want us to see what God did.  If our God had spent time in recrimination and complaint, we do not read about it.  It seems that God simply carries on with His plan.  Knowing the past, present and future, God still blesses Hagar and Ismael according to His Word.  It is likely that you (and I) spend time worrying and fussing over past and current weakness as though our lives have lost the potential to serve well or achieve anything!  Dwelling on human weakness does nothing to make one stronger in faith.  Dwelling on the Promises of God is far better remedy to weak will, weak faith, or besetting sin.

See how the story of Hagar and Ishmael works out for the apostle Paul:

(you can read the rest to get the full picture!)

The mistakes that were made merely emphasised the Grace of God and the basis of faith and God’s Promises. An illustration is there about the difference between the Old way and the New.  The old way was like slavery; the new way is FREEDOM (in Christ).

Do you think that you have spoiled any chance of being “someone” really useful for God?

How do you understand God’s Grace?

Does this story of human failure and God’s faithfulness give you fresh hope?