They are out!  In abundance in this part of the Eastern Counties.  Daffodils.  The generic name for all kinds of daffodils is NARCISSI.

That reminds me of where the name came from.  The story goes:

Once upon a time there was a young man.  He was extremely good-looking.  Some would say he was beautiful.  He became captivated by his good looks and loved to look at his reflection.  He became so in love with himself that he stayed by his reflection in a pool of water.  He was changed into a daffodil!  Another version goes that he fell in and drowned.  And daffodils grew where he had lain. 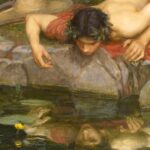 As with many ancient stories, they have a moral warning.  Human nature can become so wrapped up in itself that everything else becomes unimportant.  Do you know someone who is so full of self-importance, self-opinion and self-admiration?  This is described as “egotistical”.  Somehow, the person cannot see any view but their own.  They cannot hear criticism.  They will not do anything unless it is what they want to do.

There is nothing wrong with a little self-confidence and a sense that one has worth among others.  Self-worth can really help against the onslaught of a world that tells you that you are not good enough. Jesus tells us that each of us is worth more than many sparrows.  However, the Christian is also called to admire others above themselves. This strikes the balance.

May our Father show us mercy and help us to be considerate of others.  To support and encourage others and be less focused on our own needs.