A Tribute to my Mother

Job 2:10  Shall we indeed accept good from God, and shall we not accept adversity?”

We live in very challenging times now.  Perhaps our situation is a little like tribulations of past decades and centuries.  Many of us, though, have had fairly “easy” lives for a good while, with material things and the best medical support.  For which we are thankful.  It is possible that our relatively easy lives have made us like “hot-house flowers” – ill-equipped for inclement weather! 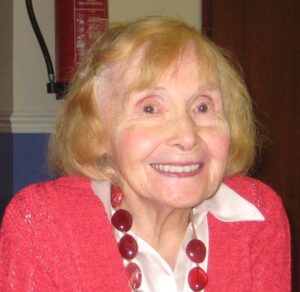 Let me tell you about my mother.

Queenie Florence Banchini was born on November 15th 1919. She died on May 8th 2012.  Let me tell you a little of the “gap between” those dates.  Her father was third generation of Italian immigrants.  My mother came into a world devastated by the First World War and then faced five years of what was called “Spanish Flu”.  This virus brought millions of deaths across the world.  Then, in 1929 a stock market crash in the USA brought the Great Depression to England (and the rest of the world).

My grandmother had very poor health and Mum was expected to care for her while her younger brother was able to attend school.  Even though Mum was very intelligent and was offered a place in a “High School”, she had to leave school in her very early teens to be Grandmother’s carer.  Granddad Banchini owned a Grocer’s shop and worked all the hours under the sun!

As Nazi politics and views developed in Europe,  a fascist group called Mosley’s Black Shirts emerged in Britain.  Gangs formed,  gangs that tried to disrupt everyday life.  My Grandfather’s shop in Edmonton was a target – windows smashed, intimidation.  This was in 1936 onwards.  My mother was only 17 then! Some people thought the family was Jewish.  Others attacked them because of the Italian connection.

Mum was a very beautiful young woman.  My father proposed to her and they married.  This was during the onset of the Second World War.  At first, Dad was an Air Raid Warden but then was called up to serve his country in the Royal Signals.  Mum was pregnant, the war raged.  The baby girl was still born!  Later, she was pregnant with me.  In 1944, when V1 and V2 flying bombs were hitting London, a bomb landed near the back of the Grocer’s shop.  Mum sheltered under a table.  After this, Mum (with many other young Mums) was evacuated to a safer part of England.  So, I was born in Southport, Lancashire!  I was around six months old before my Dad saw me!

After the war, our little family moved to Enfield, to live with my father’s mother.  A nice house but Mum had to care for her mother-in-law and one of Dad’s sisters who was disabled.  Money was scarce.  My sister was born.  Dad earned about £4 a week working as greensman on a golf course.  Mum did odd jobs and what was called “piece work” at home for mere pennies.  My brother was born.  Everything got too much for Mum.  I remember her sobbing at the kitchen sink after a particularly cruel jibe from Granny!  That was enough.  We moved to a “Council House”.

Memories of family Christmases in the 1940’s and 50’s are of our Mum and Dad “doing their best”.  A chicken from Grandad Banchini, paper chains, no “big presents”. By then,  Dad had a job with the railways and worked most Christmases. So celebrations were limited.  I do not remember Mum and Dad exchanging  presents.

There is so much more I could write about Mum’s courage, her heroism.

In the late 1990’s Mum developed breast cancer.  The day after the operation I visited her in the hospital.  There she was, sitting in a chair, fully dressed and looking her lovely self!  I have no memory of Mum complaining, or resenting other people’s blessings.  She was patient and considerate of everyone.  I am proud of her and to have been her son!  I am glad that she knew Jesus as her Saviour.