Psalms 134:1-3 A song of ascents. Praise the LORD, all you servants of the LORD who minister (or stand) by night in the house of the LORD. (2) Lift up your hands in the sanctuary and praise the LORD. (3) May the LORD bless you from Zion, he who is the Maker of heaven and earth. 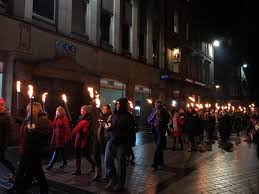 The people have completed the journey. They are in the Promised Land. Read Ezra and Nehemiah and you will see that things had only just begun! There was a Temple and the City Walls to repair or rebuild. The Psalm is brief and clear. God wants His servants to praise Him. He wants them to be near Him (in His sanctuary). He wants to bless them.
If you had thought about the songs of ascents as a picture of our journey to heaven, then I am painting a different picture. When we arrive in the Promised Land – the Kingdom of Heaven within and around us – then we can look at what it means to be safe from the attack of the enemy (within the walls) and being a suitable dwelling place for God.
Maybe this is something unobtainable until we are received into glory? The apostle Paul wrote about wanting to be in resurrection (completed) even while on earth! However, he understood that this was something to aim at, he couldn’t claim to have “got there”. However, he did not doubt that he would get there! Meanwhile he was content to press on, to STAND” true – even in the dark times – by the power of God’s Holy Spirit and the Grace of God.

Ephesians 6:13 Therefore put on the full armour of God, so that when the day of evil comes, you may be able to stand your ground, and after you have done everything, to stand.

Philippians 3:10-12 I want to know Christ—yes, to know the power of his resurrection and participation in his sufferings, becoming like him in his death, (11) and so, somehow, attaining to the resurrection from the dead. (12) Not that I have already obtained all this, or have already arrived at my goal, but I press on to take hold of that for which Christ Jesus took hold of me.