Proverbs 11:1  The LORD detests dishonest scales, but accurate weights find favour with him. 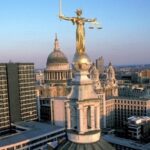 Over the Old Bailey is a statue holding some scales. The meaning is that Justice in those courts will be fair and unbiased.

In my childhood we bought all kinds of food weighed in the scales.  My Grandfather was a Grocer and sold flour, butter, biscuits – all kinds of things by weight.  These weights were produced under strict weights and measures laws.  Dishonest people might drill out some of the metal underneath and replace it with wax. Dishonest weights! Or, the seller might put a discrete finger on the scales to make less look more. Dishonest scales!

This has spiritual meaning.  We ought to be the genuine article.  No deceit, no “short-weight”.  We are not called to a super-spiritual life but to Truth, honesty, openness and, therefore, acceptance of one another. Being a Christian is not a competition but a communion.  An honest, healthy awareness of one’s weaknesses brings an honest, healthy dependence upon God to be our strength .  We do not try to give the impression that we weigh a kilo when we really weigh in at 750 grams!