Psalms 133:1-3  A song of ascents. Of David. How good and pleasant it is when God’s people live together in unity!  (2)  It is like precious oil poured on the head, running down on the beard, running down on Aaron’s beard, down on the collar of his robe.  (3)  It is as if the dew of Hermon were falling on Mount Zion. For there the LORD bestows his blessing, even life forevermore. 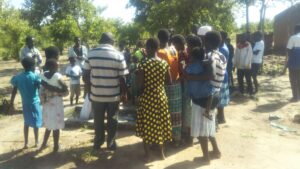 I believe that this is a very well known and much-used Psalm.  Did you also know that it was part of the songs of “ascents” – a part of the journey out of captivity and into the Promised Land?  Its place in the progression is near the end, the goal.  I don’t think that the words about unity are expressed as something aimed for or aspired for but of something they were realising!  The people were seeing and living this beautiful unity.

It troubles me that talk about unity often seems to be in a context of “not there yet”, something that is almost out of reach!.  As though this Psalm is something to aim for rather than “BE”!  It grieves me that so many talk about unity in a context of expecting people to adapt their ideas and attitudes. Another problem for me is that unity is spoken about in a context of mental, wordy, ideological things.  The unity here in this Psalm is about being , loving one another, appreciating one another, learning to understand and accept each other.

The key is DWELLING TOGETHER.  These words emphasise a real experience of living gathered in one place.  It is not about looking the same, or having the same tastes, it is about enjoying each other’s company – even placing such companionship above daily demands.  As we journey out of lockdown and remote togetherness, will we truly want to express pleasant unity in meeting together?