Proverbs 15:12  Mockers resent correction, so they avoid the wise.

On a scale of one to ten – how well do you take criticism or correction? Not good?  Its a human thing.  We like to be right and accepted so correction feels like rejection.  Resentment is a feeling that someone is being unfair to you and gives rise to anger and tantrums! 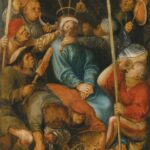 With a simple Yes or No answer – when you need advice do you go to someone who is wise in the Christian life?

Often, it seems, we prefer to open up to people who are in a similar situation or mess.  They are not likely to criticise or correct our attitudes!  God calls this “mocking”.  Certainly it involves a low view of others and a dismissive view of people who could really help.

Behold the man upon a cross,
My sin upon His shoulders;
Ashamed, I hear my mocking voice
Call out among the scoffers.
It was my sin that held Him there
Until it was accomplished;
His dying breath has brought me life –
I know that it is finished.
Stuart Townend