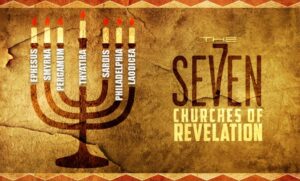 Revelation is the APOKALYPSE of Jesus not Armageddon

There are present and future appearances of the content of the book.

John was Jewish and one of the Twelve.  His ministry and scope were especially for Israel.  He is appointed to judge Israel.

The wall of the city had twelve foundations, and on them were the names of the twelve apostles of the Lamb.  (Rev 21:14)

SEVEN – in Hebrew the word includes the idea of sacred fulness.

The number is remarkable in its appearance in Creation.  The Rainbow, for example, or the seven notes in an octave.  Scholars have found the number seven to be a basis of all kinds of things in Creation.  In Scripture seven is used to denote a complete or full period of time.  It also can denote a full or complete “picture”.  So the seven lampstands describe a complete expression of the Church (or Israel).  The seven stars denote the complete character of the Church (or Israel). There are seven physical attributes of the appearance of the risen Lord Jesus: His hair, His eyes, His feet, His voice, His mouth, His face and His life.

The churches were real assemblies of God’s people.  They were under John’s Apostolic care.  The problems were real. The letters were written after John was commanded to write in a scroll ALL the things he was going to see and hear.

“Write, therefore, what you have seen, what is now and what will take place later.(Rev 1:19)

Timing in an eternal context is not possible.  However, we can see that the letters were included in the whole revelation that was written. What John had seen applied to the NOW and the FUTURE.  It is useful to learn from the letters how to honour the Lord in His churches.  Together they seem to be applicable across the Christian Church at any time in its history.  It is possible that there is a future fulfilment of what the letters mean in a different context.  The letters use Jewish symbolism and link with the teaching of Christ in the Gospels.

This blog gives a contemporary travellers view of a journey to the cities of the seven churches.

PERGAMUM  – BERGAMA– attacked by Rome around this time! Temple of Zeus and of Emperor. Pressure to conform

THYATIRA  – AKHISA– Lydia came from there.  A traders’ town on a trade route.  On river Lyca.

SARDIS – SARTMUSTAFA – rebuilt in 17AD, had a “sacred spring”, obsessed with death

PHILADELPHIA- ALESHEHIR – agricultural. Subject to earthquakes, named as a place of brotherly love. (no archeology!)