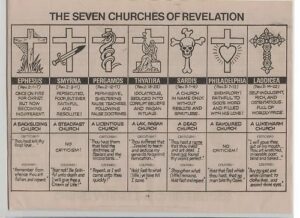 The Letters from The Lord Jesus

Based on how He revealed Himself to John in the vision on Patmos.  The elements of the vision portray things of faithfulness, truth, and judgement.

Each church is addressed via an angel (messenger) which is depicted in the vision as a star.  Stars are generally used in scripture to indicate the people of God in some way – particularly as signs or witnesses on earth.

And he brought him forth abroad, and said, Look now toward heaven, and tell the stars, if thou be able to number them: and he said unto him, So shall thy seed be. (Gen 15:5)

so that you may become blameless and pure, “children of God without fault in a warped and crooked generation.” Then you will shine among them like stars in the sky (Php 2:15)

(“Stars” in this verse should be translated “lights”)

The stars represent “angels”.  This word is the central part of “evangelist”.  The idea in the name is that of messenger.  So, either the Lord is addressing a single person who brings messages to a church or the word is used as a personification of a church.

Each church has need of focus on the Lord Jesus and of encouragement to stay true and faithful. Each church must hear what the Spirit says to the “CHURCHES” (EKKLESIA)

Each individual is called to “overcome”.  This word is NIKAO meaning to prevail, overcome, win!

The Lord of the lampstands recognises strictness to the letter but loss of the Spirit who gives life.  Merely dealing with people using the Law to condemn and control does not reflect the Gospel of Jesus.  Overcoming legalism brings back the life only Jesus can bring.

The Eternal Lord, in glorious resurrection life reminds the church that they may be troubled on every side, and worse might follow but they are asked to keep the faith knowing that beyond death there is reward and “no more death”.

The Lord, the Word of Truth presents Himself to the church and challenges the problems of lies that exist in their beliefs.  Prevalent was the idea that what one does in the body has no effect on the spiritual life (GNOSTICISM).  Those who overcome are encouraged that they will eat of the Hidden M  Manna (Ex 16:33,34; Heb 9:4). Also, they would have as theirs a white stone with a new name written there. They could have assurance that what Jesus says is the truth.

The Lord brings two aspects of the vision which speak of judgement. Fire that tests the metal. The influence of Jezebel has led people into all kinds of sins (as in the days of Ahab where the people had lost sight of who the Lord truly is and worshipped Baal.  “She” is warned of serious judgement. The rest, who, like the 7000 had to hid away, are not overburdened. They are asked to wait for Jesus to return.  They are promised that they will be “avenged” and that each will receive “the Morning Star” (Rev 22:16).

The Lord is the one who holds the seven spirits and seven stars. The seven spirits were not mentioned in Revelation ch.1!  The message is one that draws attention to the unity between the Spirit and the Son and the authority and Headship of Jesus over His people.  As far as the Lord was concerned this church was dead.  A few were living for Him.  He calls on the rest to do the same. The promise is eternal life in the righteousness that comes through faith in Jesus Christ.  The Book of Life will forever hold the names of the faithful.

The Lord reminds the people that He holds the Keys.  Doors open or shut at His Will.  This church is not strong but has resisted the false teachers and their doctrines.  They are told to hold on lest they lose their crown.  They are reminded that Jesus is returning and promised that they will not experience the “hour of trial”.  In addition, the Lord promises them a place in God’s Temple (permanent dwelling place).  Also, He will write on them –  the name of God, the name of the City of God and Christ’s New Name.

The Lord brings the church’s attention to His power and authority, His absolute justice and fairness in all things. They were lukewarm like the tepid water that flowed into Laodicea from the mountain springs.  The Hot had cooled and the cold had warmed up.  Perhaps they had become so used to the problem that they made no effort to change it?  Certainly, their spiritual condition was dire (Isaiah 1:6).  Grace from God was there to provide what they lacked if only they would respond. They needed to be sincere and to accept the discipline that identifies the family of God.  Jesus invites a personal walk with Him and promises to the overcomer a royal eternity.