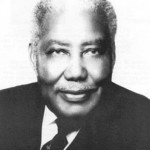 Recently,  we viewed again a YouTube Video of Samuel Lockridge preaching a sermon about the Lord Jesus (first preached decades ago). It remains an up to date message.  Most of the videos take extracts from the actual sermon. Here is one entitled “The Seven Way King”:

My King was born King. The Bible says He’s a Seven Way King. He’s the King of the Jews – that’s a racial King. He’s the King of Israel – that’s a National King. He’s the King of righteousness. He’s the King of the ages. He’s the King of Heaven. He’s the King of glory. He’s the King of kings and He is the Lord of lords. Now that’s my King. Well I wonder if you know Him. Do you know Him? Don’t try to mislead me. Do you know my King? David said the Heavens declare the glory of God, and the firmament show His handiwork. My King is the only one whom there are no means of measure can define His limitless love. No far seeing telescope can bring into visibility the coastline of His shore of supplies. No barriers can hinder Him from pouring out His blessing. Well, well, He’s enduringly strong. He’s entirely sincere. He’s eternally steadfast. He’s immortally graceful. He’s imperially powerful. He’s impartially merciful. That’s my King. He’s God’s Son. He’s the sinner’s saviour. He’s the centrepiece of civilization. He stands alone in Himself. He’s august. He’s unique. He’s unparalleled. He’s unprecedented. He’s supreme. He’s pre-eminent. Well, He’s the loftiest idea in literature. He’s the highest personality in philosophy. He’s the supreme problem in high criticism. He’s the fundamental doctrine of proved theology. He’s the carnal necessity of spiritual religion. That’s my King. He’s the miracle of the age. He’s the superlative of everything good that you choose to call Him. Well, He’s the only one able to supply all of our needs simultaneously. He supplies strength for the weak. He’s available for the tempted and the tried. He sympathizes and He saves. He’s strong God and He guides. He heals the sick. He cleanses the lepers. He forgives sinners. He discharged debtors. He delivers the captives. He defends the feeble. He blesses the young. He serves the unfortunate. He regards the aged. He rewards the diligent and He beautifies the meek. Do you know Him? Well, my King is the key of knowledge. He’s the wellspring of wisdom. He’s the doorway of deliverance. He’s the pathway of peace. He’s the roadway of righteousness. He’s the highway of holiness. He’s the gateway of glory. He’s the master of the mighty. He’s the captain of the conquerors. He’s the head of the heroes. He’s the leader of the legislatures. He’s the overseer of the overcomers. He’s the governor of governors. He’s the prince of princes. He’s the King of kings and He’s the Lord of lords. That’s my King. Yeah. Yeah. That’s my King. My King, yeah. His office is manifold. His promise is sure. His light is matchless. His goodness is limitless. His mercy is everlasting. His love never changes. His Word is enough. His grace is sufficient. His reign is righteous. His yoke is easy and His burden is light. Well. I wish I could describe Him to you, but He’s indescribable. He’s indescribable. Yes. He’s incomprehensible. He’s invincible. He’s irresistible. I’m coming to tell you, the heavens of heavens cannot contain Him, let alone a man explaining Him. You can’t get Him out of your mind. You can’t get Him off of your hands. You can’t outlive Him and you can’t live without Him. Well, Pharisees couldn’t stand Him, but they found out they couldn’t stop Him. Pilot couldn’t find any fault in Him. The witnesses couldn’t get their testimonies to agree. Herod couldn’t kill Him. Death couldn’t handle Him and the grave couldn’t hold Him. That’s my King. Yeah. He always has been and He always will be. I’m talking about He had no predecessor and He’ll have no successor. There was nobody before Him and there’ll be nobody after Him. You cant impeach Him and He’s not going to resign. That’s my King! That’s my King! Thine is the kingdom and the power and the glory. Well, all the power belongs to my King. We’re around here talking about black power and white power and green power, but it’s God’s power. Thine is the power. Yeah. And the glory. We try to get prestige and honour and glory for ourselves, but the glory is all His. Yes. Thine is the Kingdom and the power and glory, forever and ever and ever and ever. How long is that? And ever and ever and ever and ever. And when you get through with all of the evers, then, Amen.