Here is a study about the scrolls of judgement and the Scroll of Life mentioned in Revelation chapter 20. 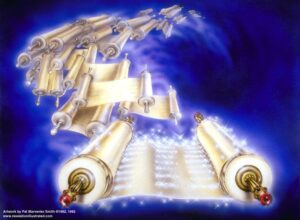 The importance of written words is strong in the Bible.  After all, it is called the Holy Scriptures (Writings).  God often told His servants to write things down.  Also, Jesus resorted to the written Word when answering Satan in the wilderness.

So, books or scrolls feature many times in Scripture.

The word first appears in Genesis chapter 5.  Books as we know them did not appear until recent history.  The word describes a scroll or sheet or plaque of written words. The material would be linen, vellum or clay. This first mention is about a book of names – Adam’s genealogy.  It deals with this physical life and mentions the death of all but Enoch.

The next mention of a book is to do with God’s plans for peoples that ignore and persecute His people:

Then the LORD said to Moses, “Write this on a scroll as something to be remembered and make sure that Joshua hears it, because I will completely blot out the name of Amalek from under heaven.”(Exodus 17:14 NIV)

The LORD will never be willing to forgive them; his wrath and zeal will burn against them. All the curses written in this book will fall on them, and the LORD will blot out their names from under heaven. (Deuteronomy 29:20 NIV)

So it continues – Book of the Law, books of history, books of kings, books of the prophets …

Then, we read at the close of the Old Testament:

Then those who feared the LORD talked with each other, and the LORD listened and heard. A scroll of remembrance was written in his presence concerning those who feared the LORD and honoured his name. “On the day when I act,” says the LORD Almighty, “they will be my treasured possession. I will spare them, just as a father has compassion and spares his son who serves him. And you will again see the distinction between the righteous and the wicked, between those who serve God and those who do not. (Malachi 3:16-18 NIV)

We read of no other kind of book until Paul writes:

Yes, and I ask you, my true companion, help these women since they have contended at my side in the cause of the gospel, along with Clement and the rest of my co-workers, whose names are in the book of life.  (Philippians 4:3 NIV)

This taken up in Revelation

The one who is victorious will, like them, be dressed in white. I will never blot out the name of that person from the book of life, but will acknowledge that name before my Father and his angels. (Revelation 3:5 NIV)

So, this Book has a promise of NOT being blotted out from it.  Next, we read of a book used to decide the fate of unbelieving people.

All inhabitants of the earth will worship the beast—all whose names have not been written in the Lamb’s book of life, the Lamb who was slain from the creation of the world. (Revelation 13:8 NIV)

Anyone whose name was not found written in the book of life was thrown into the lake of fire.

Nothing impure will ever enter it, nor will anyone who does what is shameful or deceitful, but only those whose names are written in the Lamb’s book of life.  (Revelation 21:27 NIV)

The point here is not whether Christians are written in the Book but the fact that the people assembled before God were not in the Book.  Confusion comes when we do not see these two separate facts.  We want to show that Christians are not judged about their sin and whether they can enter heaven or not.  There is no last minute change of mind based on human failure.  This truth was a bit lost in confusion over the judgement books.  Every unbelieving human will be judged fairly.  So much so, that God will look in the Book of life and show that their names are not there.  I want to make clear that the Church, [ ie. Christians, will not be at that Judgement.  I am not suggesting that we are not in the Book of Life.

However, the allusion to that Book carries with it, for some scholars, the idea that we cannot know we are saved until after we die.  This is because they believe that Christians will be present at that White Throne of Judgement.  I have explained that it was people dead in their sins that face God there.  We are alive in Christ and face a different judgement that examines our motives and character not our access to Christ’s eternal Presence. (1 Corinthians Chapter 3).

For we must all appear before the judgment seat of Christ, so that each one may receive what is due for what he has done in the body, whether good or evil.  (2Co 5:10)